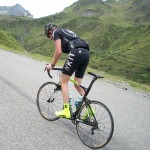 In my last post I wrote about the humbling aspect of the sporting life. Chances are if you put yourself on the starting line, 9 times out of 10, you will get your butt kicked. It’s just the way it is. Cycling, running, and triathlon are highly competitive sports. I have found that it’s beneficial to set realistic goals that define varying stages of “success.” In running and triathlon, it could be beating that guy or gal that beat you last time or setting an age, course, or outright personal record.

Cycling, particularly Road Racing, is a different story. Sure you could set similar goals to those stated above for running/triathlon, but cycling can be viciously cruel. It requires that you keep up with the lead group or be left behind to suffer alone or with other “stragglers”. You are at the mercy of the strongest guys and teams. When they go ballistic uphill, you have to follow and keep up or you are left behind. And believe me, when you fall off the pack, the minutes add up quickly.
Set Multiple Goals

So, you must be pretty liberal with how you define success so as not to get so humbled as to become demoralized. I’d say it’s best to have several goals for each race (and season) with at least one of the goals having a pretty good chance of succeeding. On the other end, set a lofty goal that is just out of reach, but if attained would be as good as a victory. This way, even what may appear to be a mediocre race may be qualified as a success to you if you reach one of your goals. 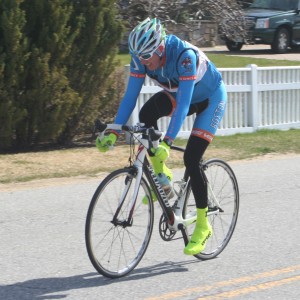 In a recent cycling race I came in 47th place. On the surface that may not seem very good. However, I basically met my highest goal—to stay with the leaders on a hilly course until the closing miles. In my mind it was almost as good as a victory. This gives me even more confidence going into the next race that I may be able to do it again or even go for a result that outsiders would call “good”. We must be careful not to let one race define us. Take the little “victories” when you can, make adjustments if needed, and move on. Don’t ever forget that just getting out the door is GOAL #1 and often that is victory enough.

What are your goals for your next event? Think about it, write them down, and keep it tight.

Dave
——————-
*Dave Andersen lives in Boston and works in the educational publishing business. He shares his passion for cycling and sport with a wide range of friends and competitors.

These Gloves Rock
Keep it Tight with P90X
Share this: