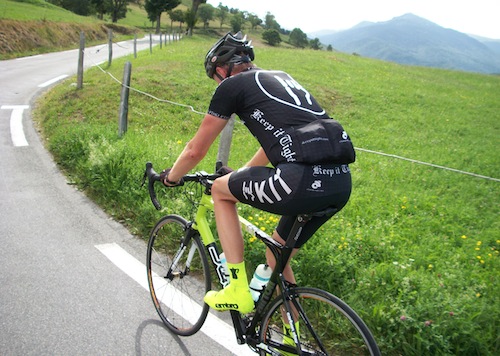 As endurance athletes, most of our training centers on moderately paced mileage. That’s good! Easy-to-moderate mileage builds strength and endurance. However, training at only this intensity will not get you super fit, or race fit. For that, you need to push to your limits and do some interval training. Runners must do this sparingly as it can put a lot of extra strain on your muscles, tendons, and ligaments. Cyclists and rowers can be more aggressive since there is no pounding.

I’ve competed in running, triathlon and bike racing for over 35 years. Let me make it simple for you. You should do some longer length intervals, some medium, and some short. The shorter they are the more intense they should be. Basically, you go hard for a relatively short time, recover, and then repeat. There are a hundred names and catch phrases for the various types of intervals but they all fall into these general categories (think cycling):

1. Long intervals — After warming up I’ll go hard 2 or 3 times for 10-15 minutes. Actually I have a stretch of road where there is very little traffic or turns. The key is to finish each interval just as hard as you started.  I time myself, but there are so many variables with wind, etc. that I don’t worry about my times.

2. Medium intervals — 4 to 6 times I’ll go as hard as I can around a loop that takes about 3 minutes. I’ll go easy for a lap in between the hard efforts. I track my average and watch it come down over the weeks and months as I get fitter.

3. Hill intervals — 3 to 5 times I’ll go all-out up a steep hill (I have two favorites; one takes 2 minutes, the other 4 minutes). These are cruel in their intensity but they sure make you race fit, and prepare you for the suffering you will face in a race.

4. Short intervals — 10 times I’ll work up to 30 to 60 second all-out bursts. Recover for 5 minutes between each effort.

Bottom line, interval training will take you to the next level. Push yourself and then push some more. Fiddle with length and number of repeats to find what works best for you. Mix it up to keep it interesting. Carefully monitor yourself to make sure you don’t strain anything. It’s amazing how after a few weeks of intervals you will become much more fit and faster. Enjoy the process and keep it tight!

There are no secrets to getting fit and, quite honestly, it boils down to consistency, hard work, and rest.  Here are some thoughts I keep in the back of my mind as I progress through the season.  I hope you find these helpful:

Thanks for reading and see you on the road.

Have you ever noticed, after sometime off the bike, that when you suit up for a ride it feels slightly foreign? The garish-looking jackets, the thermal tights, it’s a fleeting sensation, a perception distorted by the day to day routine of work clothes, perhaps a tie, a tucked in shirt and patent-leather shoes. “Who dresses like that?” you think. Then you zip up, put the cleats on and go for a ride. Even before the first few pedal strokes you’re already past the micro-awkwardness of donning something akin to a super hero costume, and things more or less fall into place. Speaking of super heroes, have you also noticed that most super power (or comic book) characters always seem to have a sidekick? Asterix has Obelix. Batman has Robin. Zorro has Tonto. Some of them hang out in crews, like the Fantastic Four, The Avengers, or The Galaxy Rangers. I am lucky enough to have Dimitri and Sílvio, who despite lacking any particular noteworthy super powers, carry on as if they just materialized out of comic book pages.

I have known both Dimitri and Sílvio for at least 10-plus years. We have raced in the same team together and share the common passion for bicycles. Road bicycles, that is. But time went by, we all got married, had kids, and our consistent and aggressive riding activities have been significantly curtailed to mesh with our new lifestyles.  Due to time constraints Dimitri ditched his roadie credentials to devote his athletic time to Triathlons (“Hey, what is the most time efficient athletic activity out there? Oh yeah, Triathlon seems like a great idea”). Sílvio, on the other hand, goes out of his way to step inside very cool and expensive in-line skates and participates in track racing. Track racing? Yes. Sílvio has a very sweet track bike that he occasionally (but seriously) races at local track.  I also suspect that Sílvio likes to ride in circles, but I digress.  No matter what our current athletic passion may be, we still appreciate a good hammer session and never miss the opportunity to make each other hurt when the time is right.

What has brought us together – and kept us together – is the collective appreciation of each other’s skills on and off the bike. Dimitri has the sense of humor of a 14 year old, which alone doesn’t say much, but complemented by Sílvio’s vast library of AM-radio folk jokes and my prodigious built-in artillery of filth, result in very colorful banter that adds to the convivial nature of our relationship. But this is not the point. The point is, through years of constantly challenging ourselves on rides, as well as dishing obnoxious retorts to each other, we developed our own language and (currently) unspoken rules to ride by – rules that are generally applicable to our regular, non-costume lives as well. This is not a clique-thing or hijinks fit for pre-school children – one of our main credos is “everyone’s welcome, and we fully expect you to be prepared to PTHD”. The sharp language and sharper efforts leave no room for half measures, half words or empty promises. The product of seemingly verbal and physical abuse – albeit dispensed collegially – has improved our riding and helped us deal with off-the bike matters in unceremonious ways. We learned that informing your riding buddies that “this is gonna be a harder session” is kindness rather than a dire warning. Or specifically communicating to the spouse that “I need 3 hours this coming Saturday” can do wonders for the relationship; what kind of wonders is up to you, though: it can be wonderfully awesome or it can leave you wondering why your partner is not laughing at your jokes, to say the least.

I suppose what I’m getting at is, performing heroics on the bike is far more enjoyable in the sturdy ensemble of good allies who know your strengths and weaknesses. The beauty of our workouts becomes an exercise in sneak attacks, strong turns at the front and town line sprints. When all those align, the hammer will drop. The suffering will be unleashed – resulting in better riding for all of us.

Caped crusaders, unite! Bring your crews, take your pulls and hold your line. There’s always room for good riding, keeping it real and keeping it tight.