The Definition of the Word “Athlete” 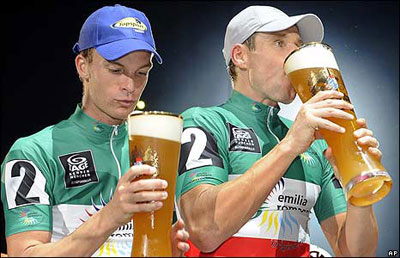 Not too long ago, while meandering through stop-go traffic on our way to a debaucherous bachelor weekend, I was faced with a most interesting question. The question couldn’t have been posed at a more inappropriate time, after all, the imminence of a booze and food overload on the next few days stared the query’s absurdity in the face. The driver (let’s call him “Dimitri”) and I go back many years and we live in a similar world: passionate, active sports folks who tread the ultra thin ice that divides the dark cold waters of our myriad-obligations and the fresh-breathing freedom that our exercise sessions provide. As married men with kids, we often define ourselves as currently-sort-of-former-but-not-quite-yet-retired racers, me as the perpetual roadie and him the triathlete. Athletic folks, in sum. Or are we?

Point blank, he asked: “Do you consider yourself an athlete?” I thought about it for a while, watching the construction trucks do their thing in a city that is never really done repairing itself. The workers needed more space, we backed up, the beep-beep warning of reverse as the “time’s up!” alarm for my reflections. “No, I do not consider myself an athlete.” I really do not. At all. And I’ll elaborate.

When one thinks of an athlete, the image that comes to mind, at least for me, is of a young-ish person standing on a podium, tears-filled eyes, mumbling the lyrics of his/her national anthem, crown of wild olive leaves, maybe a flag draped across the shoulders. That person is the celebration of athletic achievement, the iconic figure that generally conjures up on our collective imagination. And why is that? What constitutes an athlete? We can first determine the most reductive form of the idea: physical stress and adaptation that sort out the ones who do not respond well from those who do, whatever the sport may be. We think of sweat and repeated physical work. Particular skills, like throwing/kicking a ball, or shooting an arrow just right. Lifting heavy things. Running really fast, either around circles or through a pre-determined road (or dirt) course. But does the person need to be in sports? What about acrobat folks in the circus, hanging upside down while doing airborne pirouettes and landing just right? That is very physically intense, super dangerous, and definitely requires a refined set of abilities. How about Kobayashi, the famous Japanese who eats competitively for a living? Sounds trite, but he actually practices by gobbling down kilos of cabbage to distend this stomach so he can eat however many dozens of hot dogs and beat his opponents come go time. Or is it physical appearance? Do we define an athlete as someone with a chiseled physique, better yet; does one have to be lean? A Football player would easily fail that category – so would the entire “Clydesdale” field at your local tri. Does the sport have to be in the Olympics? If so, cyclo-cross, which is one of the most strenuous activities you can do to your body, is not a sport, therefore not consisted of athletes. And therein lies a panoply of micro-distinctions that are not really doing a good job at presenting compelling differences.

Which brings us back to our car ride. We had initially agreed that what we do requires athleticism. We race bikes; our rides together do require an unspoken and never mentioned “be physically well-prepared” at all times. Our workouts can be really hard, the sort that pops up temple veins, can make you heave, or feel momentarily disoriented due to huge, successive efforts. Those efforts require top level skills and constant maintenance. Am I athletic? Perhaps so. But I drink a bit too many beers and sometimes my diet can be faulty. Dimitri is even worse – folks at Dairy Queen address him on a first name basis. But those are superficial, tangible ways of identifying an athlete. From my limited experience, the intangibles are really the distinguishing actors: determination, passion, not only for the sport, but also to win, plus focus, something we refer to as “the edge”. When I’m on the bike, I am definitely an athlete. But off the bike my workouts are a patchwork with little structure outside of the “must include at least a few hard sections to be minimally fit”. Yesterday alone I ate close to 1 pound of candy corn prior to a very demanding indoor session; come to think of it, it’s a miracle my inside ride and my pre-ride insides didn’t meet each other. But seriously, real athletes carry themselves as such on and off the bike, on and off the pool, or and off the courts. Athletes take good care of their bodies, but at the same time remain athletic during sleep, while making choices at the grocery store, filling up the tank at the gas station, picking up clothes at the dry-cleaning or brushing their teeth. They offer very little in terms of excuses or disclaimers, live an ascetic life and remember the last time they had a glass of wine in terms of years, not days. The mundane doesn’t steer them away from their calling, they just do them, well, athletically. You cannot separate the athlete from the person and vice versa as they’re inextricably connected: the person is born an athlete, just like someone is born a doctor, or an actor, or a firefighter.

Our conversation eventually more or less reached a conclusion on this topic: yes, astride our bikes we’re definitely athletes. Off the bike, though, it’s a different story. Real athletes don’t fill up on candy corn, do intervals and get proud (marveled, really) of holding it down. Plus, there’s no athletic way to refer to beer as post ride beverage, not even if you swig it “athletically”. 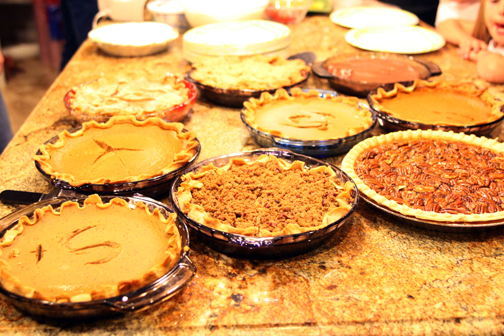 How is winter treating you? Did you make the most of the festivities, the company parties, the nutmeg-flavored brews? Then as winter prepared its glorious entry, you kept busy enjoying your buddies’ ballyhoos, your crew’s hootenannies, never mind the “Hey, try this new beer. It’s even nutmeg-ier and thicker than last year’s version!” Plus Christmas, Hanukkah and general end of year holiday celebrations we can’t just shake off. After all, you can’t pick a favorite and go to one party only, can you? Better yet, could you? Folks use this period to let go of all of their food intake inhibitions and just go to town. Imagine driving through Foodville on a convertible, setting up the auto pilot and grabbing and stuffing your face as you roll through, nary a hint of concern about tomorrow. So now that the caloric stretch between Halloween and New Year’s Eve has ended, you’re left to stretch the elastic in your sweatpants because your extra kilos said “see ya later” to your slim fit clothes (which don’t fit as slimly as they did back in the summer). Oh well. Hangover ensues, and its metallic aftertaste reaches a zenith when the thought of resolutions for the present year slaps you in the face. Time to act, re-think your options, your goals, face your demons and get to work. So what have you promised yourself for the upcoming year? Those sorts of questions can be potentially disorienting, invasive and basically annoying to the questionee. Especially because we’re addressing the topic of 2013 one month in arrears; we’re in February already, and we’re daring you to come up with a self-written score for the upcoming year. What nerve.

In general, when we stir afflictions about the collective fitness plans, we’re often hit with the “I’ll think of it tomorrow”, or “when I pass the exam”, or when “things get a little less crazy”. But this type of tomorrow never really materializes because, well, things never get less crazy; no matter how casually folks hope it to happen. It seems as if people expect some sort of divine intervention to start (or resume) physical activity, a signal from the almighty, so to speak.

The point here is to quit expecting the next chapters to be divinely unfolded; for the workout lifers out there who have families and obligations, there is an understanding that the luxury of time and the several steps it takes to get fit don’t come by easily. Patience and  goodwill are but limited commodities, so the KIT idea I try to get across is to be consistent and to maintain an above-average level of fitness at all times. You don’t know if junior will be sick next week, curtailing your plans; you don’t know if your work will be demanding those extra precious exercise hours you need so badly. For those overwhelmed with the onslaught of family activities, it can be a daunting task sneaking out for a run or hitting the rollers downstairs for a quick, mini hammer session….but you gotta do it.  My pal Dimitri once called me a “loose cannon” due to my “go/stop/wait/swap riding time/swap again” schedule of riding. It is true that having a toddler and a pre-toddler qualifies me in the “thick of it” category, and that I have missed numerous kilometer sessions with buddies due to unforeseen, last minute surprises. What I have learned and am still learning, is that improvisation skills and an open, willing mind come in handy during this period. 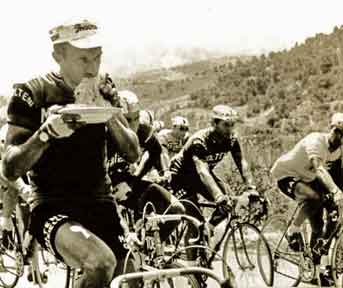 The knowledge that my athletic plans surf a wave of fluidity insists that I be realistic with my objectives, and being aware of this reality provides for a modicum of harmony. The sports we play (pick one: cycling, triathlon, running,rowing) ) are fortunately well-served in our community, so missing any given event is not the end: there’ll be plenty of opportunities to make up tomorrow, next week, or next month – and that cools my nerves. Therefore, as an athlete I figured that the need for consistent and creative work is an ever-present element. Consistent as in every effort counts, every session matters, regardless of its length (or lack thereof). The creative part depends on you: as a refined, “mature” athlete one understands the building blocks that are part of a good fitness foundation. But sometimes the workout can be so short that if all we can do is a smash and grab session, so be it. As an example, Tabata intervals (20 seconds of ultra-intense exercise followed by 10 seconds of rest, repeated continuously for 4 minutes) fall in this category, and are highly recommended for their benefits; besides, one can go hard for quick periods and still recover properly. Notice I mentioned “mature”, not “old”. You can be a mature racer who is really fast, as we know that fitness is a constant that doesn’t age; lack of activities, on the other hand, will make you grow bent, stiff and cracked, like an old tree with many season rings. I have found that having goals, or at least having a semblance of focus can be of enormous help for the duties-addled athlete.

Think this for 2013: all exercise matters, so pretend you have a race season starting sooner than you anticipated, or a 20km running event you forgot because you registered 6 months ago. The fire under the belly is the best motivator, year round. It is also impervious to whims, fads and bad weather.

Come on, let’s turn those old wispy limbs with many season rings into seasoned tree trunks on big rings.