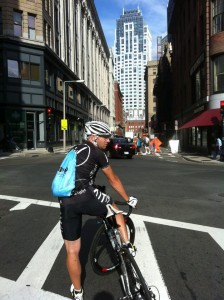 Breathe deep, hold it, then explode. Three seconds to the turn, two seconds to the next straight, three more seconds to the next turn, two more seconds back through the finish line. Lap one is done. Just twenty-nine to go. That pretty much describes the first lap of an indoor inline short track speed skating race. The track is a one hundred meter flat oval with four small orange cones denoting the turns. Oh, and you have driven six hours through a snowstorm to get up at five a.m. in order to race. The rink is still cold and there is still the remnant of the odor from the public session the night before. As you breathe deep in order to hurl yourself around the track you can sense the Chucky Cheese atmosphere and orange and blue carpeted walls around you. Yet, you are there to race and you focus on the next turn instead of the Sour Patch Kid you stepped on that almost brought you down like a Ferrari on a road made of banana peels. Twenty years and three months of training for this event makes you persevere through pain that shoots into your legs as you now find it difficult to feed your body the oxygen it needs. As you eventually cross the finish line for the last time you are now suspect as to whether or not your legs will hold you up long enough to get off the floor. Rest, recover, and get ready for the next event: the five-lap race.

Why do you do it? Why train for hours on end for a forty-five second race? Why did you spend a whole night cleaning and oiling bearings (the good expensive ones)? There are lots of whys. You tell yourself that this will make you faster, and that will improve endurance, and so on. The truth to most of the why moments is that you love it. The skates you put on only elevate you about four inches but it might as well be an alien atmosphere. All of a sudden you’re taller. Your perspective is different and you feel like you can do incredible things. You can also now move faster. With the right form and power you can traverse through the world with a flow and glide usually reserved for the winged creatures of our planet. Oh, to be in control of balance while on a knife edge. That balance that you feel when you bend a knee in the turn at full tilt, all on one foot. That’s why you do it. All that is left is to do it better than the next guy. Like cycling and other endurance sports, speed skating enrolls participants that have a shared experience and passion. Most are hard workers in all threads of their lives and don’t shy away from challenges.

Speed skating has many disciplines but there are mainly four that make up most of the competitions around the world. There is short track inline, road inline, short track ice, and long track ice. The skates used for each are all similar in that there is a stiff boot bolted to either a blade for ice or a frame for wheels. Short track ice skates have a (usually) higher and stiffer boot to help with all of the forces in the many turns. Their blades are about 15” long and 1.1mm thick. They have a slight “rock” to them and are “bent” in the direction you skate in. Always turn to the left. Long track ice skates have a lower and softer boot to allow for the larger radius of the turns and the straights. The blades are longer that those of the short track sport. They have almost no rock to them and are perfectly straight. Most modern blades for long track are also “clap” blades. These blades have a pivot underneath the ball of the foot so that they move much like a cross country ski boot and binding system. This lets the blade stay on the ice longer at the end of each stride. The technique for each is different and requires different strength but the need to skate lower is the same. Inline skates are relatively the same for indoor and outdoor. I use the same skates while only having to swap out my indoor wheels for outdoor wheels. Again, skating lower is the key here as well.

What does it mean to skate “low”?

What is the correct form that skaters throughout the eons have discovered and perfected? I used to tell skaters that skating low means you bend your knees and not just at the waist. Though, these days I have discovered that most people understand what low means if I say to bend at the ankles. In many ways it is the same form used for lots of sports requiring leg and core control. So, if you think back to the opening paragraph, that low squat position is where you need to be for a thirty lap race. Add to that the force required to move forward. Add again the force required to move forward in a turn. Then do it all faster than the last time. Faster and faster until the point is reached where the turn dares you to push “just a little more” knowing that it’s too much and you have a destiny with floor burns at over twenty-five miles per hour. Falling on the ice isn’t much fun either. In long track ice, the track is the size of a high school running track so sliding until you hit something takes a while. Short track ice falls happen in a blink and there’s not much time before you hit the pads. So skating low is how you go faster but that speed sometimes is too much for your balance.

Another aspect of speed skating that makes it both exciting and scary at the same time is the lean angle in the turns. The speed that skaters reach in the turns is such that centrifugal force wants to throw the skater out of the turn. Skaters are constantly training in order to improve the way they deal with this force. Good skaters know that they need to lean into the turn as low as they can while maintaining proper form and mechanical technique. This technique is the hard part of speed skating. It takes even the fittest of athletes to learn this. Mastering the technique is a rare thing and some skaters spend their entire career attempting to attain a style and technique that optimizes their own physical structure.

So let’s sum up here. Speed skating is a physically demanding sport that is hard to learn, semi-dangerous, not cheap, and not entirely convenient. But then there’s the flip side: it’s fun, fast, exciting, and hardcore! It feeds the needs for adrenalin junkies and folks who look for a long-term activity for their OCD. Due to the almost fringe nature of the sport, there is also a close sense of community. A new skater quickly finds out that a lot of skaters are kind of like them and they become friends almost right away.

How does this roll into (pun intended) the philosophy of KIT? It’s about finding balance between work, family, and fitness. The time, energy, motivation, and ambition for skating is much like that of other endurance activities and needs to be integrated into your life commitments. Its easy to get sucked into the skating community and, like most other endurance sports, have it take over your life. So far, this is where the core group of Keep It Tight Ambassadors have been great for me. They themselves have activities and sports that they are passionate about and support me as a skater while reminding me to keep it all in perspective.

Speedy D
——————-
*Dan Butler is an avid cyclist, speed skater, and wood worker. When he’s not putting the hammer down (literally or figuratively) he coaches the infamous Boston Derby Dames.